Guitar Hero: How a stolen 1965 guitar was recovered 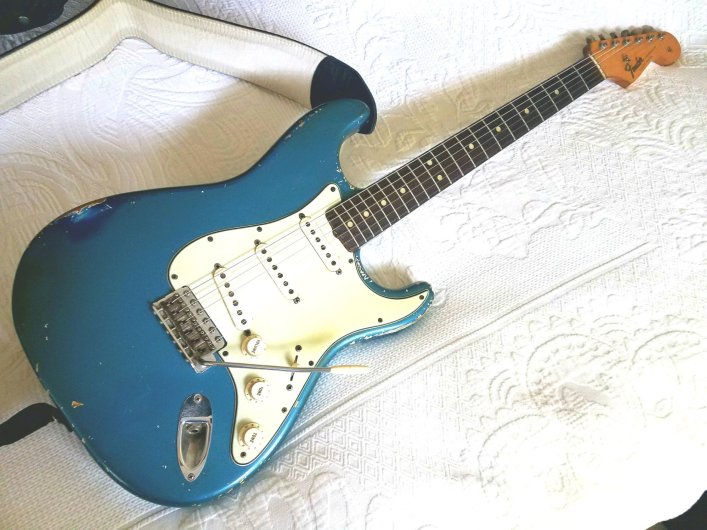 You can digest this story solely by the numbers: It took a burglar 15 minutes to steal a valuable 1965 Fender electric guitar from Harry’s San Jose home 3 1/2 years ago. The theft robbed more than a material object, it destroyed a legacy of nearly a half century, when a blue-collar father coerced all his resources to buy the instrument for his 12-year-old son.

When the story came full circle this summer it involved an Afghan immigrant named Tamim, who came to this country 37 years ago. Linking it all was a serial number: L63708, which means a lot to guitar fans. It signifies the instrument was produced by Leo Fender before he sold his business to CBS that same year. The guitar was a Lake Placid-blue Stratocaster, and it was the color that made it rare. While it wasn’t in mint condition, Harry figured it was worth $20,000 or so. To contrast, the guitar might be worth between $30,000 and $50,000 if it were in pristine condition.

Harry’s father bought the guitar new in Tempe, Arizona for $365 — nearly $3,000 today — for the then-12-year-old Harry, who had been inspired to play guitar by seeing Ricky Nelson on TV. “That had to be several weeks of wages for him,’’ Harry recalls now. “The more I think about it, the more I’m stunned.” Beginning as a Stanford graduate student, Harry played the guitar for decades in a band called the “Geoffrey Luce Band,’’ a made-up name that — by his account — was useful in persuading girls to come up and talk with the musicians.

All that changed on the night of Dec. 8, 2013, when Harry decided to grab his own unique meal while his wife was out of town. He drove out to get a few tacos, and that’s when the burglar, or burglars, struck. Even now, Harry wonders at it all: There was no forced entrance, no broken window, no ransacking. In fact, he didn’t realize immediately that the guitar was gone until the next morning, when he confirmed with his wife that she had not moved the guitar – and that her laptop was also missing. That’s when he realized that the worst had occurred. “I told my family, it’s like something had died,” he told me.

So Harry launched into his best digital effort to recover the Stratocaster. Every quarter, he sent an email reminder to a list of pawn shops and guitar specialists, reminding them it was still not recovered. He then put a reminder on screamingstone.com, which helps musicians recover stolen instruments. The notice bore both a serial number and his phone number. The years went by, and Harry lost a significant amount of the hope he had hung onto for a while. He took an insurance settlement that did not cover the full value of the Stratocaster. He then decided to buy a new and different electric guitar in the form of a Fender Telecaster.

Then, one night in June, he got a voicemail from a man with a heavy Afghan accent: “I was at a garage sale, and I bought a blue electric guitar. I think it’s yours.” It turned out that Tamim, who has a spot at the San Jose Flea Market, had googled the serial number of the guitar and received a phone number that would lead to a much awaited reunion between owner and guitar. Both men quickly agreed on terms for a very beneficial mutual deal: Tamim had paid $150 for the guitar and Harry decided to reward him $1000 for the guitar, which was double the amount he had asked for on the Screaming Stone website.

Getting the guitar back was emotional and ecstatic for Harry who quickly observed that the strings on the guitar were the same as when he had owned it before the theft. Harry invited Tamim to a block party last Saturday night, where the Geoffrey Luce Band was playing, where he then gave him a memento in the form of a unique hat with a stitched patch of the guitar he helped return to him and the words: “Guitar Hero”.