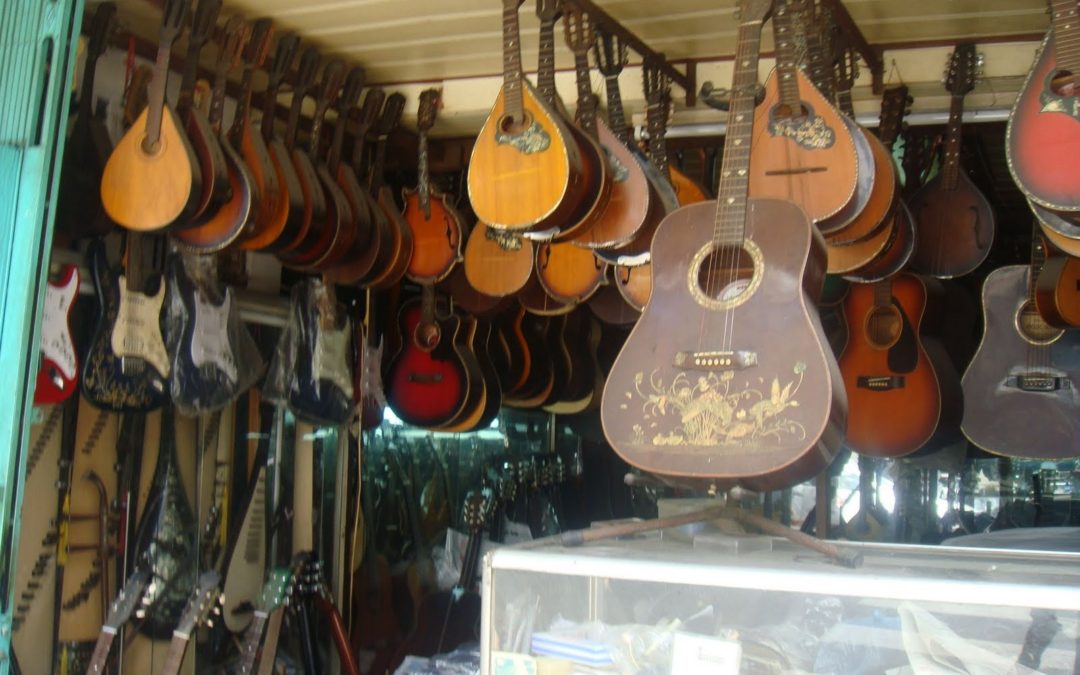 One of the longest-serving artisans on Nguyen Thien Thuat in Ho Chi Minh City, known to generations of musicians in southern Vietnam simply as “Guitar Street,” Anh, who co-owns Duy Ngoc Guitars with his siblings, has witnessed his share of changes down the years (…and not all of them are positive). “Standards have slipped. There are too many people making too many guitars and the quality isn’t always there anymore,” he says.

The instruments at Duy Ngoc typically take around a month to construct. Premium axes with more intricate paint work and details, meanwhile, can occupy up to four months of a luthier’s time. Guitars normally start at around $200 and go up to around $1,000, which is still a snip-bit when you consider that the equivalent in the West can cost up to $10,000.

Anh and his brothers use wood harvested from the vast forests of Europe and North America for their guitars. “Vietnamese and other tropical wood is not so stable,” he says. “It splits very easily.” It’s not hard to understand why Anh and other long-serving luthiers on the street are wary of shoddy workmanship. Like every artisan, the guitar makers here live and die by their reputation and they’ve been carefully nurturing their credentials since Nguyen Thien Thuat became a hub for guitars after Vietnam’s reunification back in 1975, which saw the city name change from Saigon to Ho Chi Minh City. For years, their gifts as guitar builders have earned them the gratitude and respect of Vietnam’s legion of musicians. Meanwhile, with the country opening to the outside world after years of isolation, an influx of expatriates and bargain-savvy foreigners has started to provide craftsmen, like the team at Duy, with some serious business.

Evidence of this paradigm shift in customer base is not hard to find. Photographs of beaming Caucasian rockers, posing with Anh and his guitars and mandolins, are plastered all over the wall directly behind the craftsman’s head. “Business is booming. They come from all over,” he says. “Australia, America, the UK. I even had an order from Chile recently. In the west, a handmade guitar can cost thousands of dollars. Here they are much cheaper and the quality is still very good.”

Down the street at Binh Guitar, owner Nguyen Van Binh seems thrilled by the growing fame of Nguyen Thien Thuat. No sooner am I through the door than he is pressing upon me a photocopied article from an American guitar magazine. “Business is booming thanks to all the good press and publicity,” he says. The fact that Vietnam is becoming internationally known for the quality of its acoustic guitars might be news to some people, but musicians in the country have had an affinity with stringed instruments for many centuries beforehand. Instruments such as a dan nguyet (two-stringed moon lute) and the dan ghi-ta (an acoustic guitar with a scalloped fret-board) are right at the heart of the country’s folk music traditions. The contemporary music scene, meanwhile, is beginning to gather momentum after spending years in the gutters. While commercial pop beats is by far the most popular genre among Vietnamese youth, a growing contingent of hip young guitar studs are following in the footsteps of Trinh Cong Son — the legendary auteur known as “Vietnam’s Bob Dylan” — and taking to the stage.

The music scene, overall, in the city has come a long way since the days following reunification when the sensuous, romantic nhac vang (yellow music) popular in Saigon was outlawed. For years the triumphalist, militaristic strains of nhac do (red music) was the only style permitted by authorities and the city’s rich song-writing legacy was largely left to wither on the vine. Such restrictions have long since been lifted and a burgeoning crop of venues including the Old Compass Café, Yoko and Indika provide a showcase for local talents such as solo artists Tofu, David Tran and Thanh Luke and bands like Ca Hoi Hoang, Gac Mai and Bet. These factors look to spell excellent news for the traders on Guitar Street, but it’s clear from traders themselves that not everything is as harmonious as the sounds that emanate from their instruments.

There are over 30 guitar shops on a 500-meter stretch of Nguyen Thien Thuat, selling everything from the custom-made acoustic guitars that have made the street’s name to newly eccentrically-shaped electric guitars, mandolins and traditional Vietnamese stringed instruments. Like anywhere else, however, quantity doesn’t necessarily equate with quality on Guitar Street and that is one of the biggest worries for the craftsmen who have spent the better part of the past 40 years building and burnishing their reputations. According to Anh, some of the instruments being sold by young blood competitors are being made from low-quality wood, in a rushed manufacturing process, just to get product on the shelves quickly.

The rising cost of rent in this Asian boomtown is also cause for concern. “Business is generally good,” he says. “But rent is getting more and more expensive and some people are cutting corners to make ends meet. We used to all work, and then play music together in the evenings. There’s less of that now — and it is a shame.”