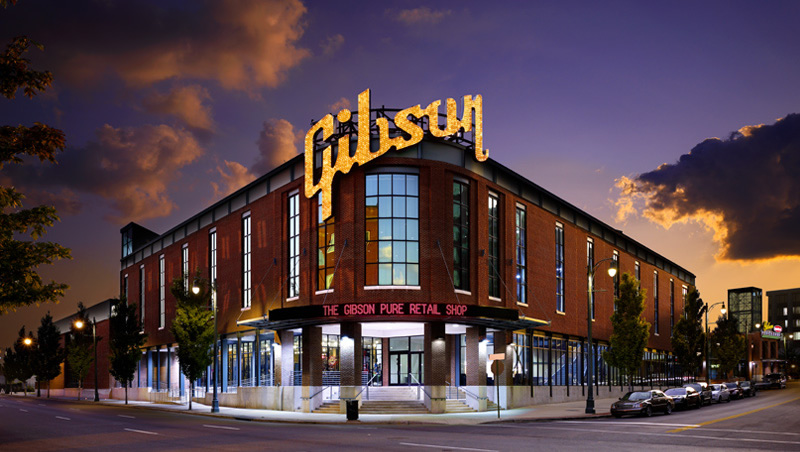 Gibson plans to move from its longtime guitar-making factory in Downtown Memphis…..to a state-of-the art facility “nearby.” The Nashville-based company announced Friday that its Memphis-based guitar manufacturing division with about 85 employees will move to “achieve improved efficiencies with a build to suit new factory nearby.” The famous music company opened it’s famous Downtown plant a block south of Beale Street entertainment district more than 16 years ago.

The announcement by Gibson did not state exactly where the operation will move, other than “to a new state of the art factory in the greater Memphis area.” The release states that Gibson’s Memphis division “is growing and achieving record profitability and sales levels. A new facility will allow the company to improve the product quality, increase production capacity and potentially increase employment in the area.” The release states that the company seeks a buyer for its current facility “that will allow it to continue to operate in this location while building and leasing an appropriate facility in proximity to the current factory location.”

“We are extremely excited about this next phase of growth that we believe will benefit both our employees, and the Memphis community,” Gibson Brands chief executive Henry Juszkiewiczy said in a prepared statement. “I remember when our property had abandoned buildings, and Beale Street was in decline,” he said. “It is with great pride that I can see the development of this area with a basketball arena, hotels, and a resurgent pride in the musical heritage of the great city of Memphis.

“We continue to love the Memphis community and hope to be a key contributor to its future when we move nearby to a more appropriate location for our manufacturing based business, allowing the world the benefit of our great American craftsmen.”

The Memphis operation opened in 2000 and by May of 2001 the new plant at 145 Lt. George W. Lee provided guided tours to visitors who watched the nearly 125 workers manufacturing over 85 guitars a day for such stars as Led Zeppelin’s Jimmy Page, Prince and Macy Gray. At the time, most of the instruments were the signature guitar based on the design of ‘Lucille’, B.B. King’s famous guitar. The plant then manufactured 42 models, with each color counting as a different model. They sold from $1,200 to $4,200 each.