A stolen guitar nearly ‘derailed’ a teen’s pursuit of music. 23 years later, she found it on Ebay! 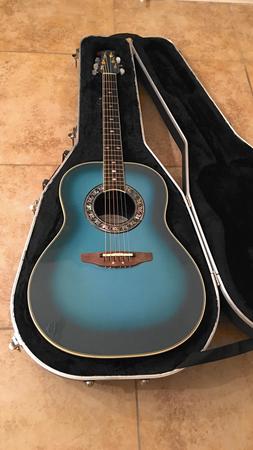 When Nicole Pompa’s guitars were reported stolen in a 1994 Skokie residential burglary, she lost her zeal for music but always kept her eye out for the stolen instruments. “I hit up all the pawn shops in Chicago until the 2000s,” she said. “When I moved to Arizona, I hit up a lot of the pawn shops here.”  She also checked online and signed up for Ebay alerts for when any guitars fitting certain criteria were posted for sale. Then on Nov. 2, she received an alert for her blue six-string Ovation guitar, which was ‘a surreal date’ in itself, she said. The original burglary occurred Nov. 2, 1994 — exactly 23 years earlier.

One of the pictures posted for the sale included the guitar’s serial number, which Pompa still had, and it matched. “I was crying and completely floored,” she said. “As soon as I saw it, I called the Skokie police. I said, ‘this might sound crazy but 23 years ago today I was robbed when I lived in Skokie and I was a minor and one of my pieces of stolen property right now is out on Ebay.'”

Two of her guitars and other music-related items were stolen in the 1994 residential burglary when Pompa was a 17-year-old Niles West High School senior, she said. She recalled coming home from school, seeing that something was wrong and immediately calling her mother. According to the police report filed at the time of the incident, someone broke into the family’s apartment by breaking a rear door glass and unlocking it. “Once inside, they proceeded to the rear bedroom and removed two guitars, one guitar case” and miscellaneous items including CDs and a dress, according to the police report. The value for all items was estimated at $4,200, according to the report.

Pompa said the burglary “derailed” her life and her pursuit of music. “I was horribly devastated,” she said. “I was playing in a band at that time and my first real gig was three days later, and I got thrown out of the band for having no instruments. I continued with music but it wasn’t the same.” Pompa began playing the piano when she was 6, the drums when she was 11 and then switched to guitar a year later. “I switched to guitar because my mom really couldn’t stand the loud noise so what does a girl do?” she said. “The girl gets an amp and a guitar. I really, really, really loved guitar.”

According to police, two stolen guitars were a blue six-string Ovation – the one she just recovered – and a six-string Fender Stratocaster (a gift from her mother). She bought the Ovation herself roughly four months before the burglary, paying for it from “job money” from the previous summer. “At the time, I spent about $700 and something, and it’s probably worth $3,500 today,” she said. “The special thing about this Ovation is that there are only 52 made. It’s a 1983 Celebrity Ovation. They made a limited number of the turquoise blue guitars.” Much has happened since that time 23 years ago with Pompa now a married woman, living roughly 1,700 miles away from Skokie, and running an online sports card business.

She credits the police for contacting the Ebay seller after she was able to supply the serial number and the original police report. The seller had bought the guitar from a Denver pawn shop for $100 and was selling the instrument online for about $700. “I spoke to the seller and told him the whole story and I cried and he cried,” she said. “I paid for the shipping only. I offered him money and he said no.” As for the other guitar that’s still missing, Pompa says she will continue to keep an eye out even though it will be even harder to find than the Ovation. “The second one is harder to distinguish,” she said. “The Ovation was very distinctive. But I’m still doing everything I can to find it. I’m not going to give up.”

Original Article by Mike Isaacs of the Chicago Tribune (chicagotribune.com)