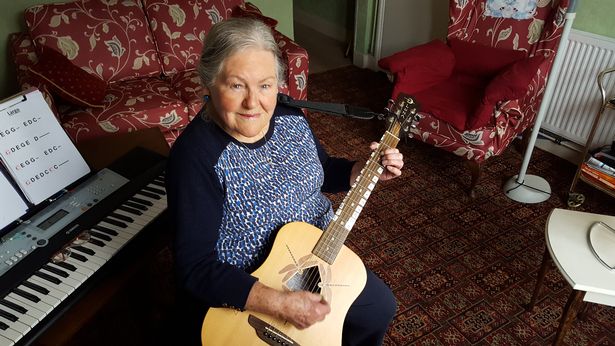 At the ripe age of 87, retired nurse Mary Collins has finished mastering her second instrument and her videos demonstrating her newfound talents receive thousands of views daily with many of those viewers stopping her in the street to talk about them. This attention serves as a motivational spark for her to encourage others to create music from the convenience of home: “The world would be a much better place if we did,” she says.

Mary suffers from macular degeneration, a condition which affects her sight, but is able to read the music her guitar and keyboard teachers, Rod Scott and Paula Dwyer, prepare for her daily. “I started with the guitar because I couldn’t get a piano into my flat!” she says. “As a former nurse I wanted to reach out to people with disabilities and get them to take up a musical instrument. Now I’m learning to play the keyboard as well. I would urge them to get a teacher – I have two excellent ones – and learn to play a new instrument.” Many have already begun to take up her advice, including several staff members of Mary’s go-to medical complex, Torbay Hospital.

The light classics make up Mary’s choice of music, and the first tune she learned to play on the guitar was “You’ll Never Walk Alone” from the musical, Carousel. She has also played “Take Me Home” and “Country Roads” on facebook posts, which were seen by over 16,000 people! “I was amazed,” she says. “My guitar teacher was so excited at the number of views. My nephew in Vancouver saw it and said it was ‘awesome’, and his son has said he is going to learn to play the trumpet.”

Mary continues to preach the benefits of music for people who are disabled and has even been pushing for a music Olympics for said disabled. She also has weighed in on her next musical endeavor: “I’d like to play the saxophone but I’d need an oxygen cylinder by my side!”